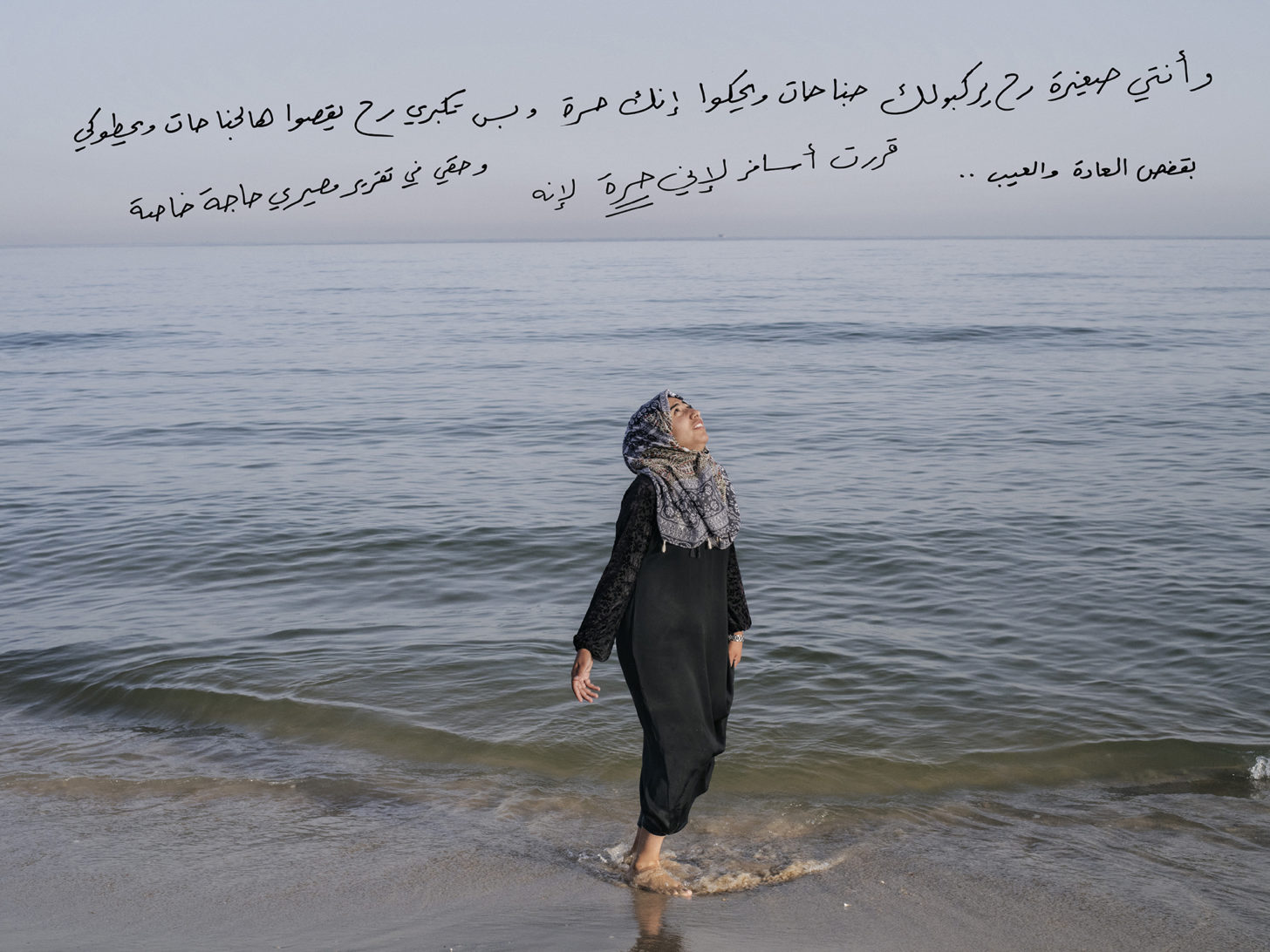 This exhibition features photographs taken by Laura Boushnak in Gaza and Saudi Arabia of local women exploring their relationship with literacy and education. Laura Boushnak is a Kuwaiti-born Palestinian photographer based in Sarajevo. Her work mainly focuses on the Arab world, looking at issues that she finds stem from her own personal experience of gender, education, and aftermath of war.

“As an Arab female photographer, I have always found ample inspiration for my projects in personal experiences. The passion I developed for knowledge, which allowed me to break barriers towards a better life was the motivation for my project I Read I Write.”

Pushed by my the artist’s own experience, as Boushnak was initially not allowed to pursue a higher education, she decided to explore and document stories of other women who changed their lives through education, while exposing and questioning the barriers they face. Boushnak covers a range of topics that concern women’s education whilst keeping in mind the differences among Arab countries due to economic and social factors. These issues include female illiteracy, which is quite high in the region; difficulties or interruptions in access to school and/or higher education, curricula devoid of real learning, low political awareness and activism, scarcity of jobs for highly-educated women and wars and internal strife

“I have always sought out a collaborative approach with the women I photographed. I wanted them to actively participate in the experience, in a way that can be reflected in the final photograph. Their candid, hand-written words, complementing their images, were the perfect way to illustrate their involvement and to display their achievements, their own personal seal.”

“My project could not have been complete without a visit to Saudi Arabia, a major regional power with a deeply religious and patriarchal society. This oil-rich country’s sphere of influence spreads far beyond its borders.”

Saudi Arabia has no problem with illiteracy. On the contrary, thousands of women have managed to get government scholarships to study abroad. It has, nevertheless, the highest percentage of female unemployment in the world, due to cultural and religious restrictions.

The Kingdom of Saudi Arabia upholds a strict implementation of Shariah, or Islamic law, which includes male guardianship and strict segregation of the sexes. While the majority of the employed women are in state teaching jobs, Boushnak was intrigued by the type of work the remaining few were able to practice.

Boushnak decided to work in Jeddah, a city with a high rate of female unemployment in the kingdom, but also a place known to be relatively less strict in enforcing conservatism than other cities. She spent time with four highly-educated women who allowed her a closer look into their personal and professional lives, and showed her how they managed to bridge the gap between available jobs and their high-level skills.

“Among the universal basic human rights, the right to education and to freedom of movement are particularly important for me. In Gaza, most people are deprived of both.”

The Gaza Strip has been under Israeli occupation since 1967. In mid-2007, the Islamic Resistance Movement, or Hamas, won a majority in the Legislative Council elections, and took full control of the coastal strip. With the already shaky balance of power among Palestinians gone, Israel imposed a strict air, land, and sea blockade on the territory, citing security concerns.

For the UN’s Office for the Coordination of Humanitarian Affairs (OCHA), the ongoing siege “undermines the living conditions in the coastal enclave” while fragmenting “its economic and social fabric”, a phenomenon aggravated by Egyptian restrictions on Rafah, Gaza’s sole crossing point with Egypt on its southern border. As a result, basic educational services, among many others, have severely deteriorated. Higher education is extremely limited and lacks many disciplines. Consequently, many students seek to further their education abroad.

Laura Boushnak’s focus in Gaza was on Palestinian women whose ambitions of academic enhancement abroad are in limbo due to harsh and unjustified travel restrictions.

Boushnak’s attention was drawn to this category during a chat with a friend at a coffee shop in Amman. Her friend was from Gaza, but she was stuck in the Jordanian capital while waiting to receive a place at a university in the UK.

The Israeli blockade restricts freedom of movement for Gaza residents, preventing many students from pursuing higher education abroad. Leaving the enclave requires getting to Egypt or Jordan, via one of the border crossings, after a lengthy process to obtain multiple travel permits.

Many aspiring students have to wait for months to get an exit permit. Many others have their applications rejected, and thus end up losing their scholarships.

During her stay in Gaza, Boushnak met four women dealing with the complicated process of getting travel permits. Their stories reflect how they patiently dealt with the uncertainty of their situation in a place that has barely time to breathe between wars, and how they handled the anxiety and anguish inherent in the unpredictable procedure.

After receiving a degree in Sociology from the Lebanese University in Beirut in 1999, Boushnak infused her interest in social issues with her passion for the visual arts and began her career as a photographer for the Associated Press in Lebanon. She then went on to work with the Agence France-Presse (AFP) at its Middle East hub in Cyprus and its headquarters in Paris. During this nine-year span, Boushnak’s experience included covering hard news in conflict zones such as the war in Iraq and the 2006 Israel-Hezbollah war.

As of 2008, she has been working as an independent photographer, commissioned for editorial assignments by the New York Times and other publications, while also giving more of her time to long-term personal projects in the Middle East.

Boushnak’s main focus has been on her on-going projects, “I Read I Write” and “Survivor.”  The former revolving around Arab women’s education and literacy, while the latter highlights the aftermath of war and its impact on individuals long after the fighting has ended. Both projects have received honorable awards and recognition including:  the first Getty Images/ lean-in editorial grant, The Terry O’neil Photography Award in the UK, and two honorable mentions in the UNICEF Photo of the Year Award.

Her work has been part of public and private collections, which include the British Museum, and has been exhibited in galleries and museums around the world, such as Birmingham Museum and Art Gallery, the Sharjah Art Museum in the UAE, and The Arp Museum Bahnhof Ralandseck in Germany.

Boushnak is a TED fellow and has been invited to give talks in different parts of the world, including two separate TED talks in 2014 and 2016, where she shared the stories behind her “I Read I Write” and “Survivor” projects to a worldwide audience.

She is the co-founder of RAWIYA, the first photo collective in the Middle East.

The exhibition is curated by Josephine Reichert and made possible through support from Arts Council England.

I Read I Write Closing Event