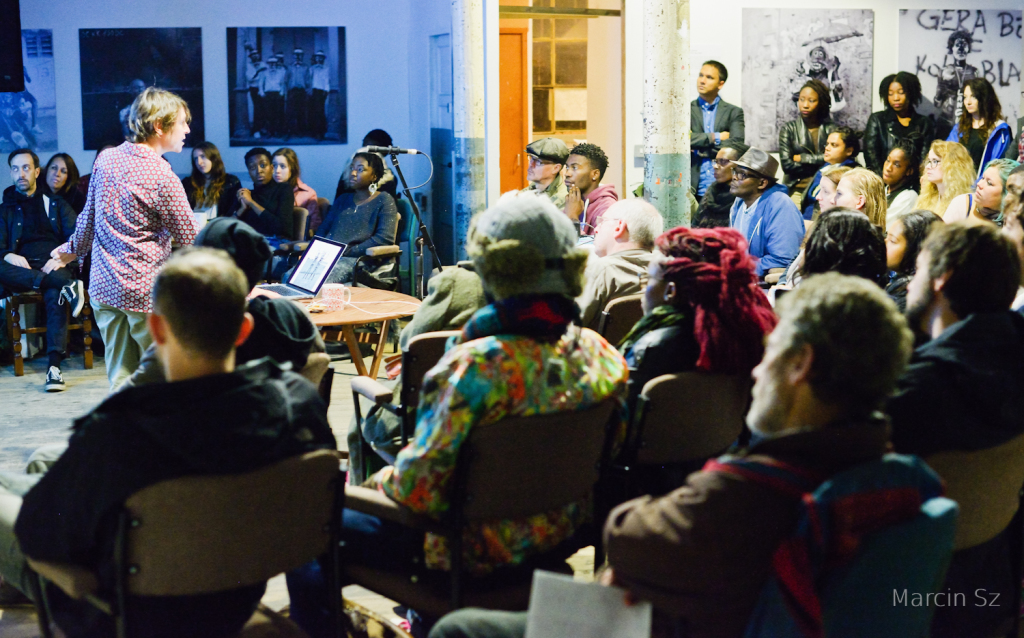 KANAVAL: Vodou, politics and revolution on the streets of Haiti
An Exhibition by Leah Gordon at Ort Gallery Birmingham

Ort Gallery is delighted to present “KANAVAL: Vodou, politics and revolution on the streets of Haiti” an exhibition by Leah Gordon.

Gordon is a photographer, film-maker and curator who has, in recent years, produced a considerable body of work on the representational boundaries between art, religion, anthropology, colonialism and folk history. The photographs in this exhibition, taken from her recent publication of the same name, document the pre-Lenten Mardi Gras Festivities in Jacmel, a coastal town in Southern Haiti. Her photographs register Haiti’s juncture between its history, its cosmology and the present. Gordon’s images document troupes of ‘performers’ acting out mythological and political tales in a whorish theatre of the absurd that course the streets unshackled by traditional parade. Light years away from the sanitised corporate-sponsored tourist parades of carnival throughout the world, the images reveal an event that is a potent vessel for transmitting, telling, retelling and reinterpreting Haitian history.

Leah Gordon has been recording the masks and of Jacmel’s carnival for the last sixteen years on a 50 year old Roleiicord twin lens reflex camera. In a calmer, more tranquil, times she has met with the carnival performers and collected the stories behind the masks. These are stories of complex Vodou rituals, ancestral memories, political satire and personal revelations. The lives of the indigenous Taino Indians, the Slave’s Revolt and state corruption, are all played out using drama and costume on Jacmel’s streets. The photographs will be accompanied by recordings of readings of the oral histories presented in the voice of the community of Hyson Green, a neighbourhood in Nottingham with strong similarities to Balsall Heath. The exhibition is a touring exhibition curated by New Art Exchange based in Hyson Green.

Furthering these cultural links and creating a crossover between Haitian and local traditions, a small part of the gallery will show a documentation of the Balsall Heath Carnival from July 2014. The carnival has run every year since 1976 and celebrates diversity, community cohesion and the neighbourhood itself. This part of the exhibition will document this year’s festivities through photography, artefacts and voice recordings.

Gordon’s film and photographic work has been exhibited internationally including the National Portrait Gallery, UK; Parc de la Villette, Paris; the Museum of Contemporary Art, Sydney and the Dakar Biennial. Her photography book ‘KANAVAL: Vodou, Politics and Revolution on the Streets of Haiti’ was published in June 2010. Leah Gordon is the co-director of the Ghetto Biennale in Port-au-Prince, Haiti, was the adjunct curator for the Haitian Pavilion at the 54th Venice Biennale in 2011, was the co-curator, with Alex Farquharson, of ‘Kafou: Haiti, History & Art’, at the Nottingham Contemporary.

KANAVAL: Vodou, politics and revolution on the streets of Haiti is a touring exhibition curated by New Art Exchange (NAE), Nottingham.

We regret that the gallery is only accessible through stairs, we are working on making the building more accessible.