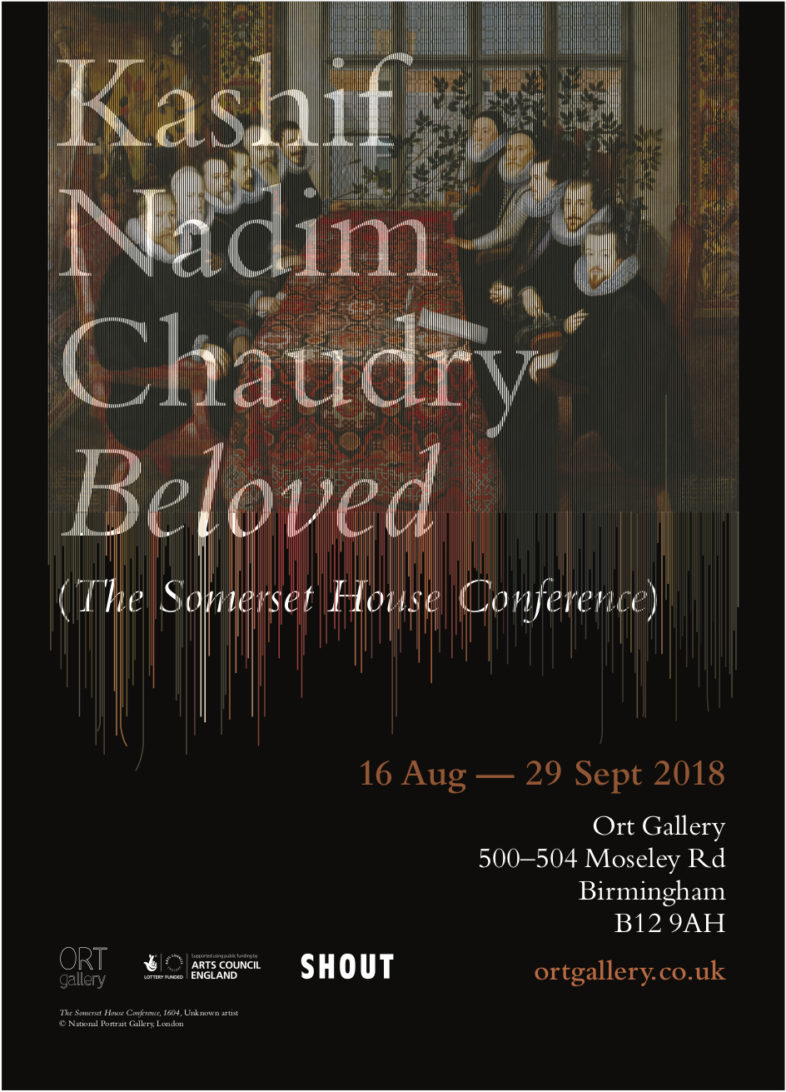 An exhibition by Kashif Nadim Chaudry

Ort Gallery are pleased to present ‘Beloved (The Somerset House Conference)’ a new commission by British-Pakistani artist Kashif Nadim Chaudry. Chaudry is Nottingham-based and received a BA in Textiles from Goldsmiths College. For ‘Beloved’ the artist draws inspiration from two places; firstly from the poetry of Rumi, the 13th century Sufi mystic and secondly from the 17th century painting ‘The Somerset House Conference’. Rumi refers to the beloved frequently within his poetry and there is a lot of debate as to whether this beloved is in fact his male lover Shams or else a term for the Divine or, perhaps, both. ‘The Somerset House Conference’ is a painting Chaudry has been obsessed with for a long time: “It’s quite an odd composition, populated with a group of very austere looking men, surrounded by a very rich and opulent interior; it’s full of contrast and heavily symbolic, which I love.”

The exhibition takes over the gallery through large conical forms reaching from floor to ceiling and creating a mountainous landscape. These sculptural pieces are inspired by the whirling dervish skirt presented here on a monumental scale. “I’m becoming much more interested in ceremony and ritual and the role that movement plays in this and how sculpture can carve out a space and  channel an audience.” says Chaudry. The simple black fabric of each skirts is interrupted by a heavily embroidered and colourful panel. The exhibition touches on topics including Patriarchy, White Privilege, LGBT+ rights, gender, faith, tradition and culture. The Elizabethan aesthetic, found within the 17th century painting, was highly influenced by the Ottoman and Mughal Empires. This merging of the Oriental and the quintessentially British forms part of Chaudry’s investigation into his own place in the world.

The exhibition is curated by Josephine Reichert.