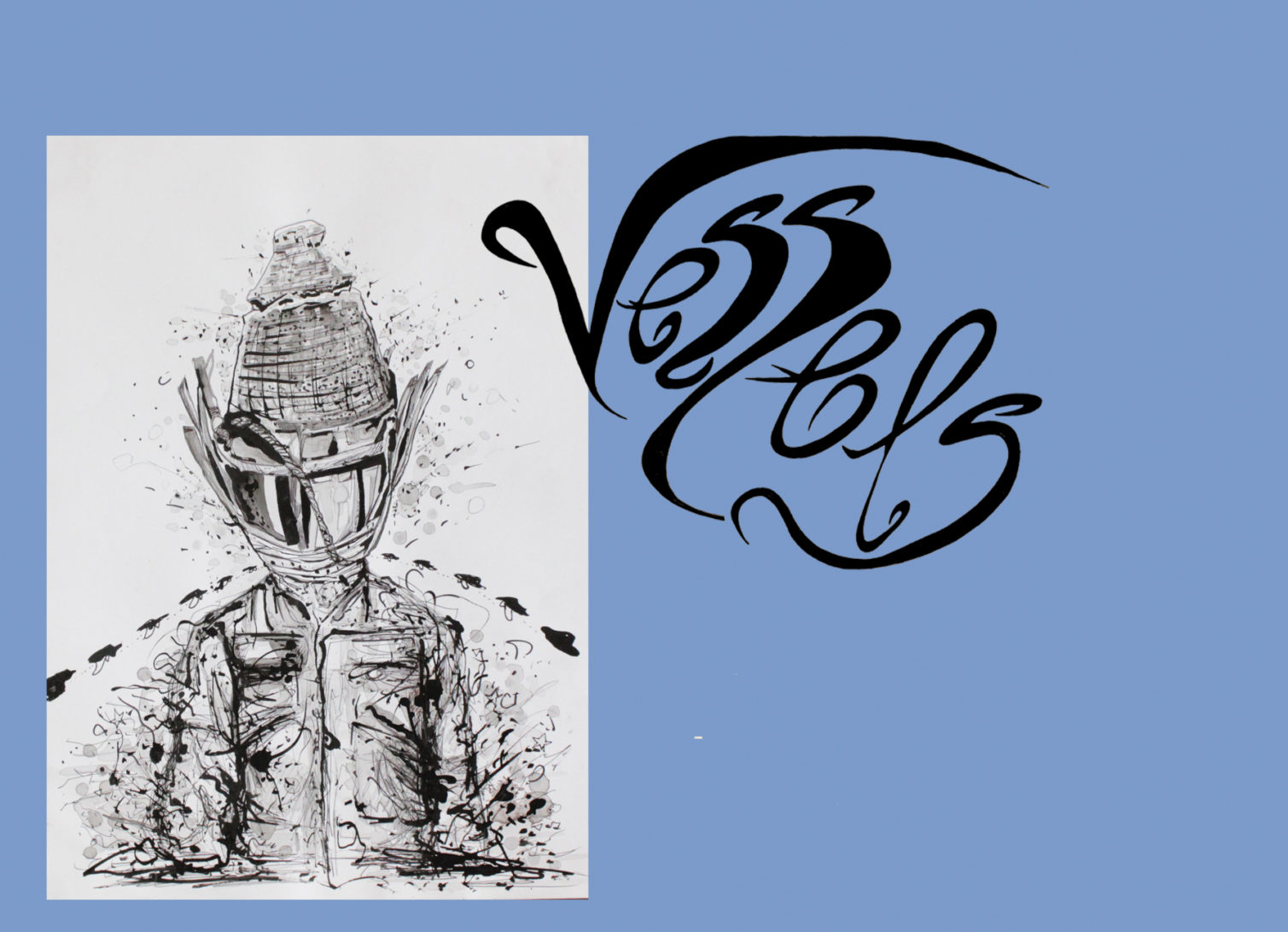 Born in 1987 in Somalia, Ahmed lives and works in Birmingham. He is a published writer and a multidisciplinary artist who primarily works in painting and drawing. His visual work is rooted in his writing: the themes for his paintings and drawings are influenced by his poems. Ahmed has two poetry publications When Heroes Hide Behind Curtain Ropes (2016) and Vessels (2017). He also performs his poems.

The exhibition at Ort Gallery is entitled Vessels after Ahmed’s most recent poetry publication (on sale at the gallery). Somali cultural artefacts have a memorial and a ceremonial value to the artist who describes them as survival packages. These artefacts have everyday domestic uses but are also valuable purveyors of cultural identity and memory. “These are essential vessels of life” says Ahmed, “the artefacts remind me of the connection of people, personal relationships, spirituality, ancient practise and the belongings of my ancestors.”

Ahmed questions nomadism and what it means to be a modern-day nomad. The body of work on display focuses on the notion of cultural authority, ownership and displacement. He explores his identity and heritage by using traditional materials such as frankincense and charcoal. The use of these indigenous materials in his work creates a link to the historical background of nomadic people from East Africa. The displacement of black African bodies and the Somali migrant experience is explored in a personal and accessible manner.

Ahmed draws from memory, focusing on past events, which give the drawings a childlike and simple visual language. In 2012 Ahmed visited his grandmother Khadija in Somalia and this trip heavily influenced his artistic career. He created dozens of drawings of her face whilst asleep which captured their shared experience. Ahmed learnt from her about the importance of traditional clothing signifying the sunrise of Somalia. The simplicity of the nomadic way of living impacted on her character as well as the transition of her moving to the city. He was influenced by her poetry, folk tales and personal stories in which she told him about her life. These were vital ingredients for Ahmed to build his work and visual and written language.

“If you don’t fully understand the language of the land it takes away your cultural identity and membership. How can we then create our own path of understanding towards this odd culture? Possibly, by developing a new language of storytelling exploring how I feel about my heritage, culture and tradition.” Here, Ahmed unpicks the concept of trying to belong to a country that is not his birthplace and therefore allows the visitor an insight into the perspectives of a young generation of Somalis living in the diaspora.

“Everywhere can be called home, but for me home is where I feel happy in my mind and in memory.” Ahmed is no longer connected physically to Somalia, but his culture and artefacts connect him to his land. Spirituality also connect Ahmed to his birthplace and the use of incense and henna in his artwork allow him to be closer to the notion of home.

Vessels by Ahmed Magare is on show at Ort Gallery from 5 October to 23 November 2019. Curated by Josephine Reichert. This exhibition is part of Ort Gallery’s Community Ambassador Scheme supported by Arts Council England.