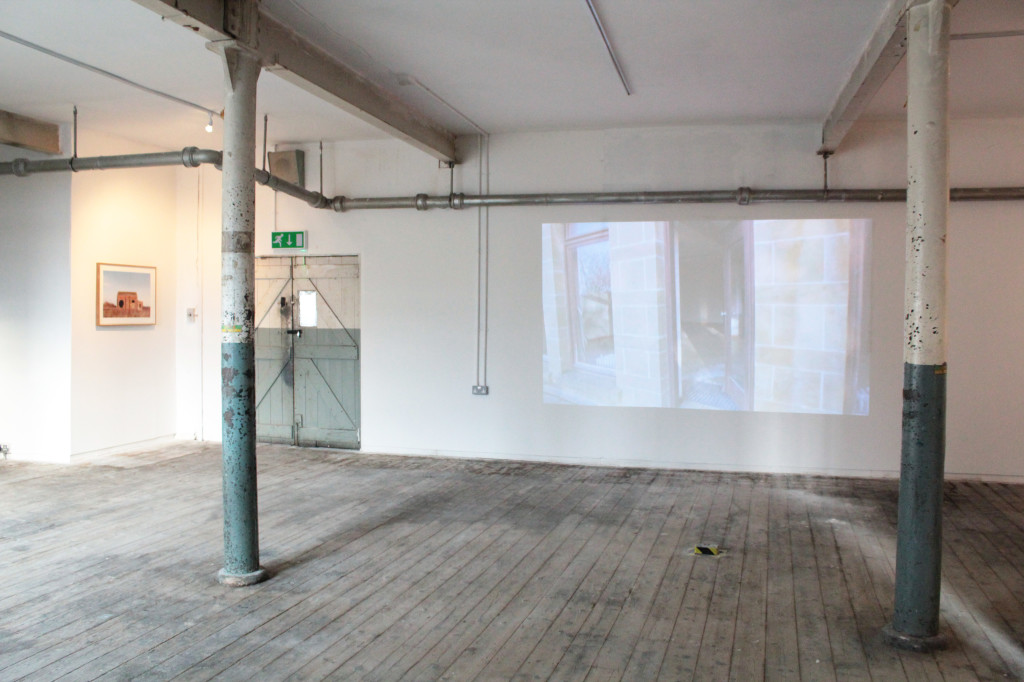 Ort Gallery is delighted to present Passing, an exhibition of video works by Joanna Greenhill.

Joanna Greenhill’s work explores aspects of transience. The contemporary ruin is of particular interest to her due to its potential to encapsulate time and history, while demonstrating continuityand rupture. In this state, a building is caught between absence and presence, existing in a state of suspension.

Coming from a sculpture background, the building-ruin exists for the artist as both object and process. The use of moving image allows the camera to function as witness to the building’s state and reinforces the notion of the body as a primary site for knowing the world.

The exhibition at Ort Gallery consists of several videos works, Prinknash and Passageway (Prinknash) both embody explorations of the recently absented Prinknash Abbey in Gloucestershire. The Abbey, a 1970s building, is temporarily suspended between absence and presence, between its previous identity as a monastery and the advent of developers. The film explores the viewpoint of a solitary walker through the deserted building. The camera’s movement identifies both presence and subjectivity, offering to incorporate the viewer in the act of tracking. St Mary’s at Dawn recordes the changing light and sound around a deconsecrated church as the dawn breaks and continues the theme of the changing state of buildings.

Joanna Greenhill has had a long career in fine art higher education; she was Course Director for the MA Fine Art Course at Central Saint Martins 1995-2010 and continues in higher education as a PhD supervisor and examiner.  Joanna explored the implications of transient work and how artists engage with process in the seminar programme Fugitive Materials at Tate Modern in 2005-6. In 2010 she curated and exhibited in the show Is This All there Is at the Lethaby Gallery, Central Saint Martins, London. Joanna has published a text on the work of Eva Hesse, and presented papers on Helen Chadwick and Gabriel Orozco.  In 2009 she exhibited work in: In Between the Lines : A Survey of British Drawings at Trinity Contemporary, London and New York.

Since moving on from teaching full time, in 2011, Joanna participated in Project 101, a group video exhibition at the LAB Gallery, New York. In 2012 she was part of the Site Festival, Stroud and the Art Site Festival, Walthamstow with the exhibition Doublefold.  In November and December 2012 she is installed a text work at Savage School Window Gallery, Vyner Street, London. She is currently a co-director of INDEX|gallery in Stroud, Gloucestershire.

Joanna has had an ongoing relationship with the School of Art at Birmingham Institute of Art and Design, Birmingham City University as occasional tutor and as a member of validation, interview and research teams. She is the director of the Mike Holland Trust, established in 2003, which has supported MA Fine Art students at Birmingham with postgraduate bursaries.